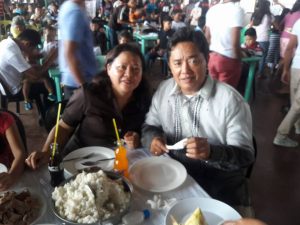 Faith Island Missions Inc. is an indigenous ministry to the South-Central Islands of the Philippines. It was founded by Pastor Discoros (Danden) Sales in the early 1980s. Together with his wife Shirley, they have seen the establishment of some 50 local churches and ministries.

To learn more about Pastor Danden and Pastora Shirley’s ministry on blogspot, please click on this link.

To see an interview of Pastors Danden and Shirley Sales, please click on this link.

God has given Pastor Danden and Pastora Sales a call and burden to reach those tiny populated islands. Most of them have never heard the preaching of the Gospel.

The Philippine Islands became a Spanish colony during the 16th century; they were ceded to the US in 1898 following the Spanish-American War. In 1935 the Philippines became a self-governing commonwealth. In 1942 the islands fell under Japanese occupation during WWII, and US forces and Filipinos fought together during 1944-45 to regain control. On 4 July 1946 the Philippines attained their independence.